Scroll to the bottom for latest developments!
Updated May 21st, 2021

It all started with a tree.

The Albert Crescent District in New Westminster, BC has a rich history. Originally, it was the most affluent district in New Westminster. Established in 1876, Albert Crescent Park was considered a jewel, with amazing views overlooking the Fraser River. It was chosen to be the location for the first royal visit to the city. Unfortunately, since the construction of the Patullo bridge in 1937, this amazing green space has been progressively disregarded.

One of the reasons is the fact that neighborhoods of low socioeconomic status tend to see less maintenance and less investments coming from city governments. Albert Crescent District is currently the poorest neighborhood in the city, as well as the neighborhood with the least people graduated from high school or higher levels of education. The Albert Crescent District also has the highers proportion of households comprising of single parents with children (according to the census of 2016, as cited by the Patullo project document, 6.3.3.4.1). Areas such as these are the ones who most benefit from natural beauty and a park with proper maintenance. A park is a wonderful place to bring children and help them connect with nature; the Albert Crescent District needs its park to be maintained, so that families feel welcomed.

Beautiful long grass would be fine, letting the area be wild would be wonderful... who does not like butterflies and birds? But you can't have it both ways. You can't allow the area to fill up with trash, and then mow everything down once in a while, trash included. The disregard for the park has reached its limits.

Back in 2011, the City of New Westminster unveiled a Community plan which included ideas for revitalizing the Albert Crescent District, and some changes have happened in order to improve the area; however, ten years later, this meant little for Albert Crescent Park, which has sunken deeper in disrepair. It is not a safe area for families and children for a variety of reasons, and certainly not safe at night.

Here are some things we learned from watching the park:

While there are plans to improve the park further once the Patullo bridge replacement is built, these plans are for a faraway future, and the extent of improvements is still unclear. Besides new paths for bicycles and pedestrians, no plans regarding maintenance (such as regular clean up and trash cans) has been provided. Meanwhile, the park continues to disintegrate more every day.

The park needs to change today. Not tomorrow.

It is easy to see the difference between the care given to the parks by simply walking through them. To highlight these differences, please see some photos below, taken on the same day, in both Queen’s Park and Albert Crescent Park.

...and photos taken at Albert Cres. Park on the same day.

How the First Campaign Started

This first campaign started with a sign near a weeping tree which was cut down mid April. This tree was the only one in the area, and was several stories tall. At the time, a reason for this cutting was not provided, and the neighbourhood was not consulted.

An update received on 05-10-2021 affirmed that the tree was removed by the Pattulo bridge crew since it was not a protected tree, in order to accommodate a new path for bikes and pedestrians. Apparently construction could not simply go around the tree, which is strange considering there is NOTHING anywhere near it.
While there is some work being done near the Patullo bridge, and some trees were cut in the immediate area, this tree was nowhere near the work being done.

So, It was disheartening to see that, instead of seeing a correction of the park's real and plentiful issues, we saw  the removal of one of the remaining highlights of the park near Columbia St.

The area now is covered in litter. The sad sight is a permanent reminder of the decay in the park.

The first sign was installed near the stump of the fallen tree.
This first sign lasted two weeks.

Interestingly enough, while the sign was removed by the city,
the trash in the area (including all the rubbish on the stump) remained there,
the grass remained overgrown and covered in trash, and all the issues were still the same.

We wonder how long it will take for them to be removed?

An interesting development on May 10th...

The city came up with a very creative way to dispose of both the excess grass length AND the trash combined.

What happens when you mow trash?

The city of New Westminster decided to finally mow the grass for the first time this year at Albert Crescent.

The problem is twofold.

First, they did not pick up the piles of garbage which were on the tall grass beforehand.

Second, they left the incredible mounds of cut grass behind,
as well as the confetti of trash strewn all over the park.

Why such disregard for this neighborhood?

How can we enjoy this? Are we supposed to sit on the piles of grass and trash?

They also mowed a small vole, too gruesome for photos.
The City may claim that trash cans don't work as they remove them from bus stops and other locations; but THIS is clearly not working either.
Studies done in several other cities, such as this one, say the same thing.
Albert Crescent Park in itself is a GIANT CASE STUDY.
The theory that people will carry their trash home has been proven wrong.
More frequent clean-ups would be a better solution.

New signs are up: 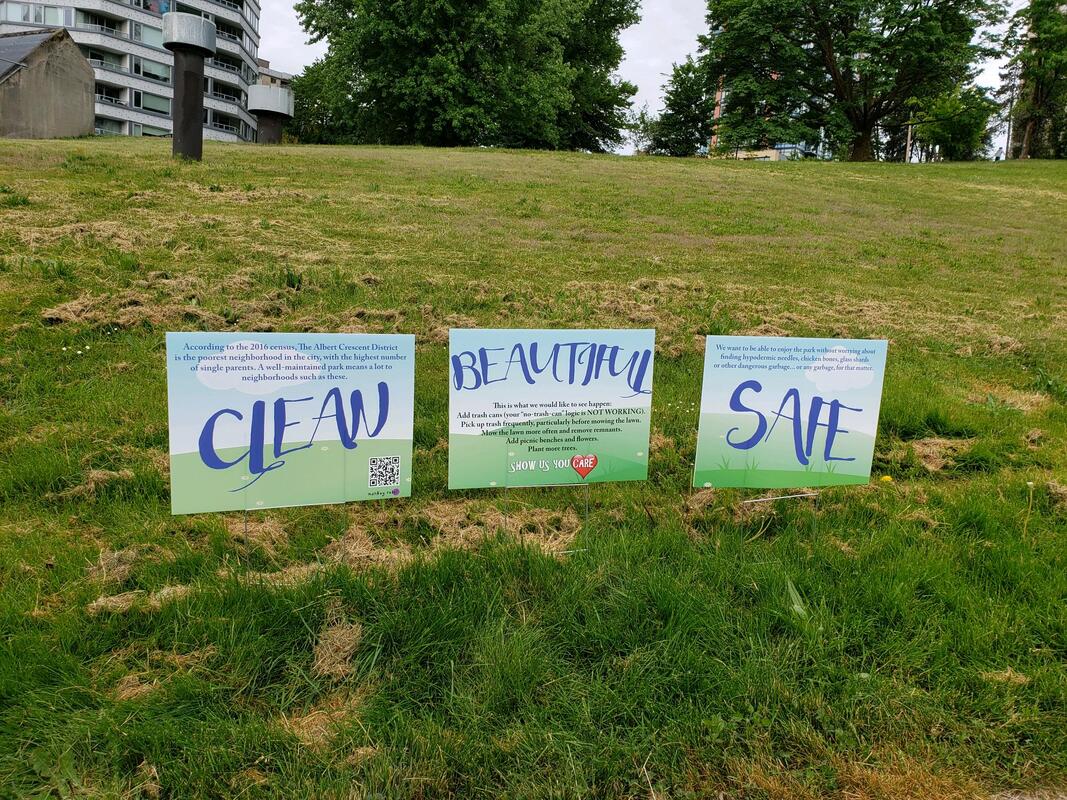 Ok, maybe we are pushing it with the picnic benches, but adding it to the area on the top of the hill where things are manicured would not be that strange.

The City of New Westminster has a very strange relationship with nature.

"Trees" are not seen as actual living beings. What is more, the City of New Westminster has a very puerile sense of what "environmentalism" is. They don't understand that trees are full ecosystems, with animals living and depending on them. Trees are just things to be removed if they are in the way.

They believe that if they plant a smaller tree every time they remove an older tree, it all balances out.

This would be the same as saying that it's OK to kill someone as long as another baby is born in its place -- disregarding all the contributions that the person makes, and all the impact it has in the world.

A tree is a living being.

The Pattullo tree experts wrongly claimed that there were no nests on the tree, which was easily refuted by anyone who walked by the tree the following day and saw the large group of birds crying on the ground after the removal of their home.

The City allowed the Pattullo Bridge workers to remove the tree NOW, even though plans to replant a "substitute" tree (or 2) are years away.

The most appalling thing is, this concept of "replacing every tree removed with 2 new ones" goes AGAINST THE CITY'S OWN TREE PLANTING MASTER PLAN (click for link), which states as their second guiding principle:

So, what happened to QUALITY over QUANTITY?

The City should STEP INTO THE 21st CENTURY and start MOVING trees, just like other cities have already done.

Moving a tree is not hard to do.

We have companies in the area that specialize in this -- moving a mature tree is far more sane than killing it and replacing it with thin baby trees which will take a lifetime to develop into a home for animals.

Besides having an outwardly facade of "Environmentally conscious city", the City of New Westminster HAS to start matching their words with their actions, and actually protecting the environment. A simple online search shows how widespread the disregard for trees is in this city.

With "A Tree's Lament", we hope to get our point across. 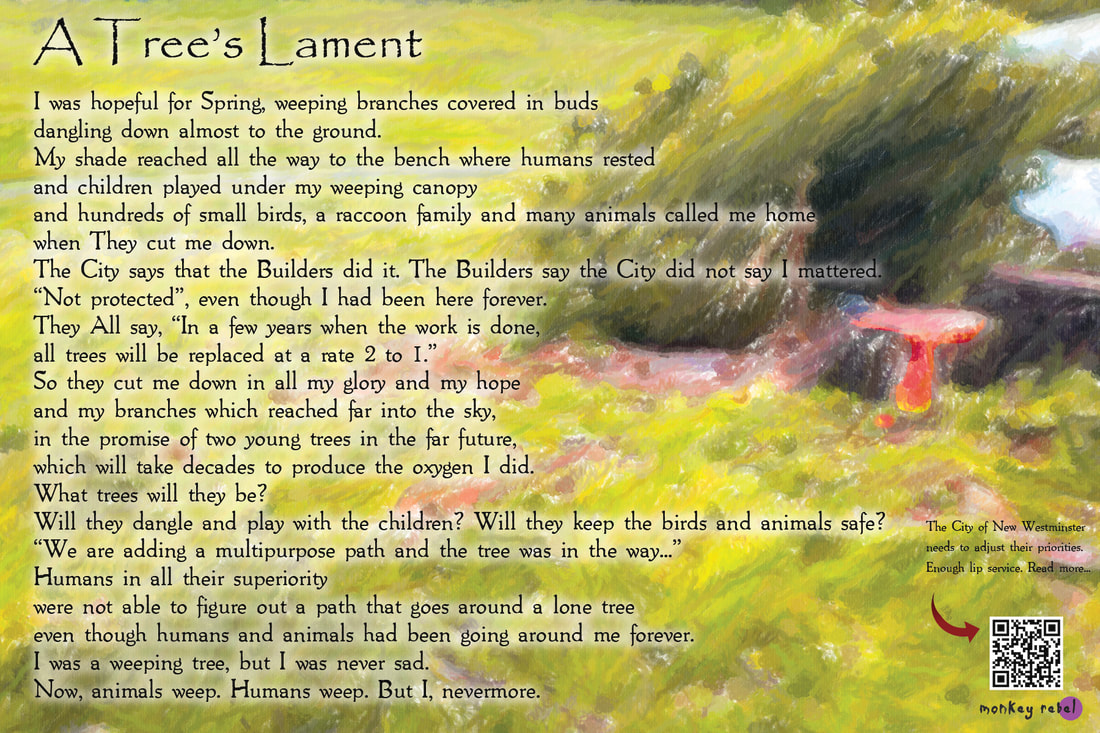 As this is a bigger sign, it will take 2 weeks to print.

This afternoon, the girls were giddy when I shared some exciting news.

A crew came into Albert Crescent Park today, right on the path where the mole was laying, and actually went through the grass with a fine tooth comb --- and they removed all of the trash confetti!

Not only that, but the boots which have been there for over two months are gone, and the area around the tree stump is very tidy.

We have never seen the park look this good -- for the past two years!

This clean-up effort and development was quite gratifying, and came right after an email which we saw earlier this morning...

Turns out the city has been informed of our signs and found their way onto our website. They sound sincere and willing to discuss the issues we have laid out here in this page.

We are looking forward to sharing with the city our hopes for Albert Crescent Park.

Including a new, weeping tree.

This also explains the high levels of permanent and decaying garbage we all have observed on the park.

While the park has been in progressive decay for a few decades, the issue has been compounded by the splitting of the responsibilities regarding clean-up and maintenance between the Cities and the Pattullo Bridge Replacement Project group.

So, what has the City proposed?


Just make sure to take a picture with some sort of landmark behind -- a close-up of a needle on grass becomes very hard to find, for instance.

This will be very useful in the future. We are all installing it in our phones!

On this swift follow-up email, the City Representative reiterated the City's commitment to change, and also provided us with a series of excellent links for everyone to get involved:

"...the City has developed an inclusive and accessible public engagement strategy that includes principles based on diversity, accessibility & inclusion, respect, informed discussion, partnerships with community members, transparency, responsiveness, and a commitment to leaning and improvement.  A great place to participate in conversations with the City on issues that matter to you is through the Be Heard New West portal.  Other ways to get involved are to participate in one of the many City committees including the Youth Advisory Committee.  For more information about City committees, this link will take you to the Committees page of our website so you can learn about other committees, their mandates, review minutes and agendas, and details on how to participate."
From our part, we committed to not use the City's logo any longer in our future projects -- we also have blurred images in this website of past signs containing the City's logo. That was naughty even for us ;)

We congratulate the city in admitting that there were problems with the park's maintenance and for their willingness to meet with us and address these issues, one by one.

We also were very happy with the message that was conveyed, which is that the City Council appreciates this kind of constructive activism. As we move forward through our different projects, we will keep this in mind.

We also appreciate the fact that the City recognizes that young people need to feel their voices are heard.

Thank you to the City of New Westminster Representatives who met with us, and thank you sincerely for leaving us with these very important messages!

And finally, THANK YOU to the public who reached out with positive and encouraging messages. It has been a boost to the troops throughout this process! 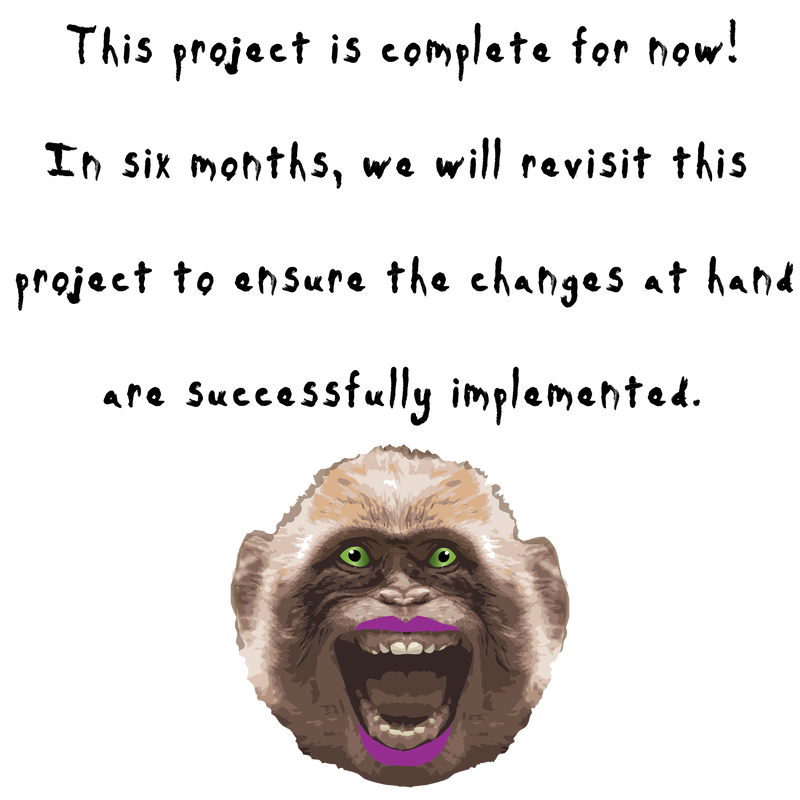